Established in 1995, the Big Hole Watershed Committee is a watershed group and central hub of diverse viewpoints on resource and community concerns. We are a consensus-based 501(c)(3) nonprofit organization dedicated to conservation of the Big Hole River and surrounding watershed. Our work is comprehensive, spanning floodplains, communities, wildlife, water, and fisheries. We provide education, facilitate conversations and planning for issues in our area, and put meaningful restoration work on the ground.

The Big Hole River valley is a high elevation basin at the headwaters of the Upper Missouri River. We are open lands, big sky and big mountains, free flowing river, and traditional ranching culture. Unlike most other watersheds in the West, our area remains relatively undeveloped. It is of the utmost importance to preserve the quality of the river and its watershed in order to:

We make our decisions based on consensus and work closely with other conservation organizations and agencies on watershed restoration and management plans.

We are committed to:

“Nothing would have happened on the ground without the BHWC … and I am damn proud of the work we’ve done … if we hadn’t done anything in ’95, the grayling would be listed and we’d all be suffering.”

The 1980’s and early 1990’s were not an easy time in the Big Hole. Several years experienced drought, grayling declining, and tensions rising. In 1994, the USFWS announced Arctic grayling as a candidate for the Endangered Species Act, with the Upper Big Hole River a critical threatened population stronghold.

In August 1994, after a tour on the Big Hole River with the Legislative Water Policy Committee, 6 ranchers sat down to write a letter to Governor Marc Racicot asking for help to set up a committee to deal with problems on the river. Their intention was to seek positive actions instead of reacting to negative reports.

Water rights holders were invited to a meeting January 1995 and met several times that spring. The group created a format that would appoint 2 ranchers from each of 4 river stretches. The next step was to invite other interests, a difficult move for the ranchers, who had found themselves at odds with some outside interests. And yet, they knew involving diverse interests was a key to success. They included water utility, businesses, conservation groups, conservation districts, guides & outfitters, local government, and sportsmen.

The new group met for the first time as the “Big Hole Watershed Committee” (BHWC) later that year. Determining they needed support to be organized, the group involved the Montana Consensus Council.

Only weeks after the group formed, and with Montana Consensus Council support, they faced their first challenge. In the prior legislative session, Montana Department of Natural Resources and Conservation (DNRC) was directed to study rivers that were candidates for “Chronically Dewatered” listing. The study proposed listing the Big Hole River as Chronically Dewatered, a designation that would require control and measurement of all irrigation diversions. The Big Hole River was identified as a candidate after a 1993 survey that cited, while historical conflicts over water had been resolved at a local level successfully, future cooperation may be in jeopardy due to changes in land ownership and increasing demand. There was heavy local resistance to the designation and concern the new BHWC would be in jeopardy.

The newly formed BHWC swayed DNRC to delay the decision and allow the committee to identify solutions to water issues that needed to be resolved. The BHWC was in favor of local committee and local control rather than of state or federal control of resources. The group worked quickly, scheduling a series of educational meetings to learn about water management, history, and options, and formulated a work plan.

One of their first milestones came in 1997, enacting the first Drought Management Plan in the state. The plan used voluntary participation to meet target river flows and is still in place today.

In 2004, conditions worsened. Grayling were proposed for emergency Endangered Species Act listing and likely subsequent permanent listing. The Center for Biological Diversity sued USFWS over the grayling and suggested they may sue individual irrigators. The BHWC met with partners and advisors and strengthened efforts. The MFWP-administered Upper Big Hole CCAA followed in 2005, enrolling landowners in site plans to benefit grayling in exchange for some litigation protection. That same year, BHWC became a 501(c)(3) certified non-profit, able to secure funding to support water and grayling work.

The DNRC, satisfied with progress, still has not issued a Chronically Dewatered status on the Big Hole River.

In 2014, USFWS announced the Arctic grayling did not warrant listing under the Endangered Species Act, citing successful conservation efforts.

The BHWC went on to become a model in watershed and drought management statewide.

The 22 Original Governing Board Members, 1995

* Individuals that continue to serve the BHWC.

The Big Hole Watershed Committee is funded through donations and government/foundation grants. Visit our donation page to make a contribution. Past funders have included, but are not limited to:

1% for the River Conservation Fund 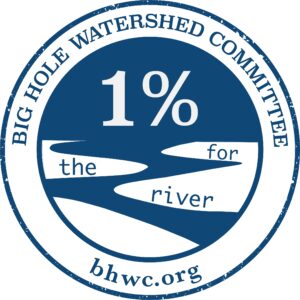 River Conditions Our Projects Get Our Newsletter